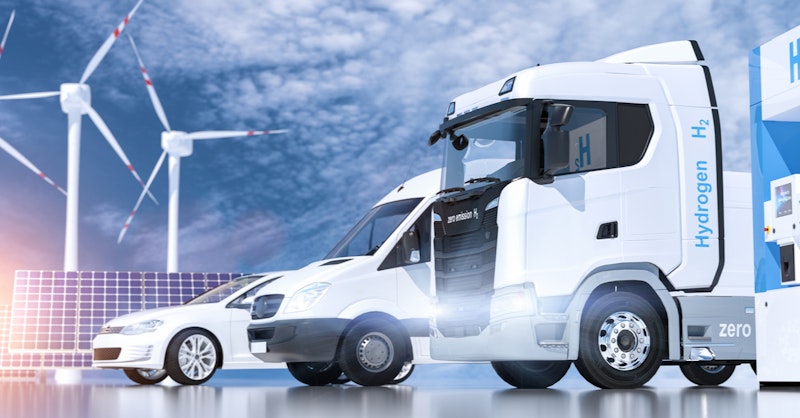 All major players in the automotive industry are racing to develop and deploy zero-emission vehicles: a tumultuous change in powertrain technology is underway. The new report from IDTechEx, "Fuel Cell Electric Vehicles 2022-2042", analyzes the role of fuel cells in on-road vehicles. Fuel cell systems have potential as a technology for on-road transport applications that must be zero-emission but where the daily driving demand cannot be feasibly met by a battery-only powertrain.
On-road transport is a major contributor to every country's greenhouse gas emission. For example, cars, light commercial vehicles, trucks, and buses are responsible, in aggregate, for around 93% of the EU's domestic transport-related greenhouse gas emissions. Similarly, in the US, on-road vehicles generate about 85% of domestic transport emissions. This high proportion puts the sector firmly in the crosshairs of policymakers.
It is recognized that an almost total decarbonization of on-road transport is required for countries to meet their 2050 climate objectives set as part of the Paris Agreement. Also, as important, is growing acknowledgment of the impact that traffic emission has on local air quality and the health of urban populations. Major cities are increasingly looking to ban or tax the entry of combustion engine vehicles into city centers, impacting the technology choice for public transport, delivery vehicles, and taxi fleets as well as private cars. Zero-emission solutions are needed for all on-road vehicle segments and the technology will need to be able to meet the daily duty cycle of those applications, however arduous.
Whilst battery-electric solutions are leading the transition to zero-emission powertrains, the energy density of today's automotive lithium-ion batteries means that the daily range of battery electric vehicles (BEVs) is limited by both the maximum weight of batteries that can be carried by a vehicle and by the available space for batteries within the vehicle.
Fuel cell systems (which incorporate a hydrogen fuel cell into an electric vehicle architecture) generate electrical energy to power the vehicle by means of a chemical reaction between hydrogen fuel (stored at high pressure in tanks within the vehicle) and purified intake air. Fuel cell systems can offer a superior energy density to battery-only powertrains and therefore deliver greater range at the same weight.
This advantage, combined with the potential to refuel considerably faster with hydrogen than the time it takes to charge a large li-ion battery, means fuel cell electric vehicles (FCEV) offer operational flexibility closer to current combustion engine vehicles than BEV can deliver. In some applications, FCEV may be the only viable zero-emission powertrain solution.
Major manufactures including Toyota, Ford, Honda, GM, Hyundai, Volkswagen, Daimler, and BMW have invested large sums over the past 30-years in advancing fuel cell technologies, and the technology has been commercially available since 2014 when Toyota began mass production of its Mirai FCEV.
However, for passenger cars, the culmination of these efforts is the reality that in 2021 only two major OEMs, Toyota and Hyundai, have FCEV cars in production, and fewer than 10,000 FCEV were sold in 2020. Battery electric vehicles in comparison, whose development began in earnest at a similar time to FCEV, sold more than 3 million units in 2020. FC passenger cars are chasing a moving target, that will be difficult to catch, with BEV technologies improving rapidly in this segment. Whilst there are concerns with BEV powertrains around the need for replacing batteries within the vehicle operational lifetime and there have been several vehicle recalls related to battery fires, FCEV cars will likely face similar issues as fuel cell system technology matures. Hyundai announced in August this year that it is recalling 15,000 NEXO's (all NEXOs sold before June 2021) to fix a rattling problem. They have also announced a 'buy-back' program for NEXOs which need a fuel cell stack replacement before 250,000km. Hyundai's quality defects are a setback for FCEV car proponents, given that the NEXO has accounted for around half of global FCEV car sales. 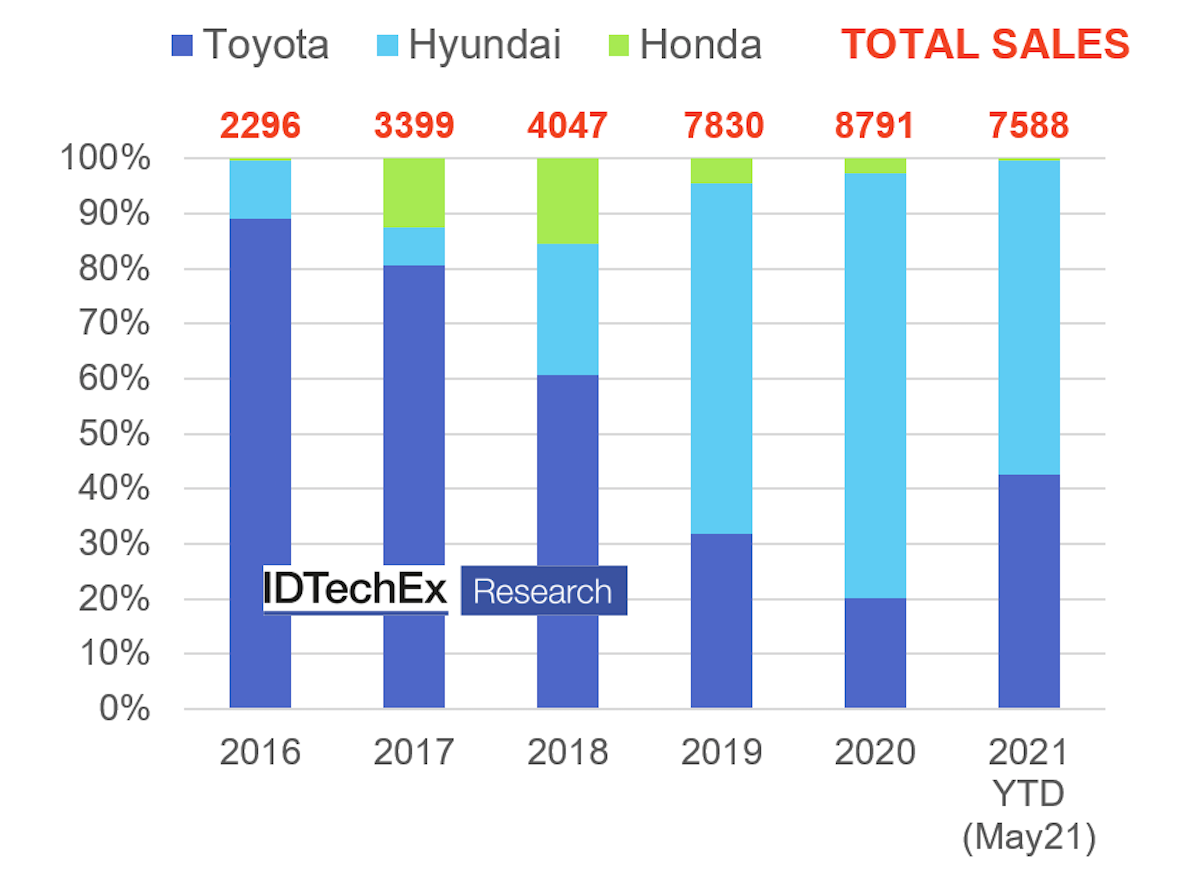 Top Three FCEV Car Manufacturers Market Share. Source: IDTechEx "Fuel Cell Electric Vehicles 2022-2042"
The range and refueling advantage for FCEV means that heavy-duty applications, such as long-haul trucking or high mileage bus operations, which would require a very large battery with a battery-only architecture, likely offer greater opportunity for fuel cell technology in the near term. The IDTechEx report explores fuel cell vehicle deployment in these sectors and looks at the progress being made. Hyundai for example is conducting commercial trials in Switzerland with a fleet of 46 FCEV trucks, with plans to increase this to 1,600 trucks by 2025. They have also announced upcoming FCEV truck projects in the US and orders for 4,000 FCEV trucks in China. There is also some penetration for FCEVs into the bus market, with more than 150 fuel cell buses operating in Europe, 65 in the US, and more than 3000 in China. A growing order book for FCEV buses suggests demand is increasing, at least to a pilot-scale level of testing.
Fuel cell electric vehicles may have a role to play in meeting climate change targets, however, there remain significant obstacles to overcome before low emission fuel cell vehicles are commercially feasible. Not least is the necessity for low-cost production of renewable green hydrogen which is essential to make FCEV both economically viable and deliver the low emission credentials on which the technology is being promoted.
The high cost of producing green hydrogen and its relative scarcity means that it is not currently economically feasible as a transport fuel. 95% of the hydrogen produced today is generated from fossil fuels, which whilst cheap, does not greatly improve the carbon footprint of on-road vehicles. The need to build hydrogen refueling stations is also a barrier that will limit deployment of FCEV to those countries prepared to commit to substantial infrastructure funding. There is also an inherent inefficiency in using green hydrogen as a transport fuel. Because of efficiency losses transforming renewable electricity to pressurized hydrogen fuel and then back to electricity to power the vehicle, renewable electricity is likely to have more of an emission reduction impact when deployed in battery electric vehicles.
The IDTechEx report, "Fuel Cell Electric Vehicles 2022-2042", details the current state of fuel cell vehicle development for passenger cars, light commercial vehicles, trucks, and city buses. The report provides an overview of fuel cell technologies, hydrogen generation, and carbon capture and storage. IDTechEx provide their analysis of the technical and economic challenges of fuel cell deployment in the different on-road transport applications and presents their independent 20-year forecasts for the future of on-road fuel cell vehicles including unit sales forecasts, fuel cell demand forecast, and market value forecasts.
For more information on this report please visit www.IDTechEx.com/FuelCell. The Fuel Cell Electric Vehicles report is part of IDTechEx's broader mobility research portfolio, tracking the adoption of electric vehicles, battery trends, autonomy, and demand across land, sea, and air. Helping you navigate whatever may be ahead. Find out more at www.IDTechEx.com/Research/EV.
IDTechEx guides your strategic business decisions through its Research, Subscription and Consultancy products, helping you profit from emerging technologies. For more information, contact research@IDTechEx.com or visit www.IDTechEx.com.