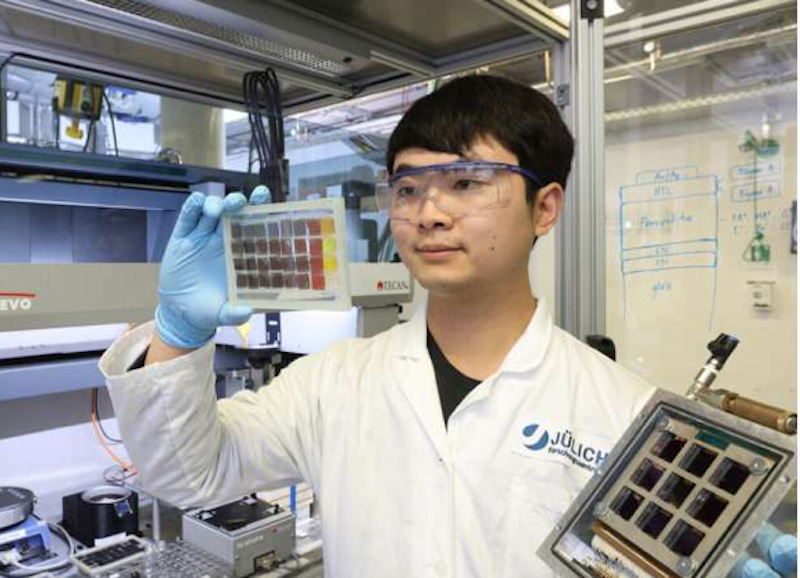 Perovskites are the great hope for further increasing the efficiency of solar modules in the future. Until now, their short service life has been considered the biggest hurdle to their practical use, but this could soon change. In the current issue of the journal Nature Energy, researchers from the Helmholtz Institute Erlangen-Nuremberg of the Forschungszentrum Jülich have presented a variant that stands out for its special stability. In tests at elevated temperature and illumination over 1450 hours of operation, the perovskite-based cell retained 99 percent of its initial efficiency.
A characteristic feature of perovskites is a specific crystal structure. Numerous material combinations of different atoms and molecules are possible, some of which exhibit ferroelectric, superconducting or photovoltaic properties. Although known since the early 19th century, the class of materials was only recently discovered for photovoltaics. Just 10 years of research were needed to raise the efficiency to the level of conventional silicon solar cells at an unprecedented rate. Compared to silicon crystals, perovskites have several decisive advantages: they can be produced easily, cost-effectively and in an energy-saving manner. The layers of perovskite cells, which are only a few hundred nanometers thick, can also be well applied to conventional silicon cells. While silicon-based technology is already considered mature, such "tandem solar cells" offer new opportunities to further improve the efficiency of solar cells. For further information see the IDTechEx report on Perovskite Photovoltaics 2018-2028.

A question of stability

"The Achilles' heel of perovskite solar cells is their low durability," explains Prof. Christoph Brabec of the Helmholtz Institute Erlangen-Nuremberg (HI ERN) at Forschungszentrum Jülich. "Classic silicon modules are quite durable. Even after more than 20 years in practical use, they lose little of their performance." Solar cells made of perovskite, on the other hand, usually lose efficiency after just a few days or weeks. Early cells could literally be watched aging, with efficiency dropping within seconds or minutes of turning on the lights in the lab.
"The solar cell we have now presented in Nature Energy, on the other hand, impresses with its exceptional stability. The values are certainly among the best ever measured for a planar perovskite solar cell in a long-term test," Brabec said. The illuminated cell had to survive 1450 hours at elevated temperatures around 65 degrees Celsius in the laboratory and remained largely stable throughout the test period. At the end, it still had 99 percent of its initial efficiency. "Long-term prediction is always difficult. But the perovskite solar cell we have now developed could certainly be operated for more than 20,000 hours under normal circumstances," estimates Prof. Brabec.

The result is no accident. In their search for the right material, the researchers systematically tested hundreds of different perovskite mixtures for their suitability using high-throughput methods. The researchers then used the best ones to build their cell. "Even if you only rely on proven components, you come up with tremendous numbers of possible compositions that we can produce and test automatically using our methods. In other studies, there are sometimes even significantly more," explains Dr. Yicheng Zhao, who played a key role in the scientific investigations. "That is why we need to use a systematic approach to identify the best material combinations."
Another important optimization step concerns the stable contacts of the perovskite within the cell, which is built up in several thin layers. The ionic dopants or metal oxide nanoparticles commonly used to contact the cell tend to undergo secondary reactions at higher temperatures. This reactions can even lead to corrosion of the metal electrodes, as the researchers at HI ERN were able to demonstrate through measurements and scanning electron microscopy. Contact and electrical conductivity thus deteriorate at an early stage.
"To improve stability at the contact point, we packed the entire electrode in a kind of protective shell," Zhao said. A new double-layer polymer structure, with the bottom side undoped and the top side doped with a non-ionic dopant, protects against degradation and ensures that the contact is maintained. On the one hand, this architecture protects the very sensitive interface to the perovskite, and on the other hand, it shows exceptionally stable conductivity, even at elevated temperatures.
For the future, the HI ERN researchers are now aiming for further efficiency improvements. "With an efficiency of 20.9 percent, the tested cell does not yet fully exploit the potential. 24 to 25 percent should be possible in the near future," explains Yicheng Zhao.
Source and top image: Forschungszentrum Juelich