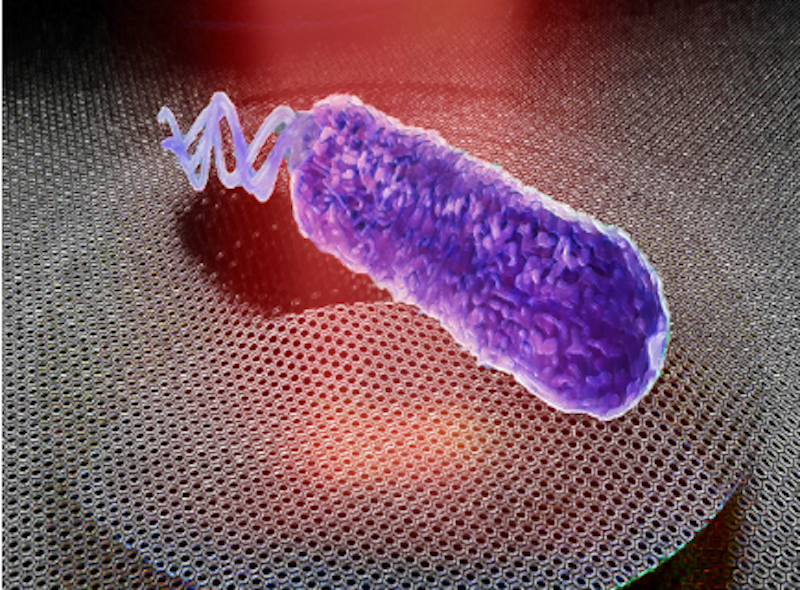 Have you ever wondered if bacteria make distinctive sounds? If we could listen to bacteria, we would be able to know whether they are alive or not. When bacteria are killed using an antibiotic, those sounds would stop - unless of course the bacteria are resistant to the antibiotic. This is exactly what a team of researchers from TU Delft , led by dr. Farbod Alijani, now have managed to do: they captured low-level noise of a single bacterium using graphene. Now, their research is published in Nature Nanotechnology.

The sound of a single bacterium

Farbod Alijani's team was originally looking into the fundamentals of the mechanics of graphene, but at a certain point they wondered what would happen if this extremely sensitive material comes into contact with a single biological object. For further information see the IDTechEx report on Graphene Market & 2D Materials Assessment 2021-2031.
"Graphene is a form of carbon consisting of a single layer of atoms and is also known as the wonder material," says Alijani. "It's very strong with nice electrical and mechanical properties, and it's also extremely sensitive to external forces."
The team of researchers initiated a collaboration with the nano biology group of Cees Dekker and the nanomechanics group of Peter Steeneken. Together with PhD student Irek Roslon and postdoc Dr. Aleksandre Japaridze, the team ran their first experiments with E. coli bacteria. Cees Dekker: "What we saw was striking! When a single bacterium adheres to the surface of a graphene drum, it generates random oscillations with amplitudes as low as a few nanometers that we could detect. We could hear the sound of a single bacterium!"

Punching a graphene drum with a bacterium

The extremely small oscillations are a result of the biological processes of the bacteria with main contribution from their flagella (tails on the cell surface that propel bacteria). "To understand how tiny these flagellar beats on graphene are, it's worth saying that they are at least 10 billion times smaller than a boxer's punch when reaching a punch bag. Yet, these nanoscale beats can be converted to sound tracks and listened to - and how cool is that," Alijani says.

This research has enormous implications for the detection of antibiotic resistance. The experimental results were unequivocal: If the bacteria were resistant to the antibiotic, the oscillations just continued at the same level. When the bacteria were susceptible to the drug, vibrations decreased until one or two hours later, but then they were completely gone. Thanks to the high sensitivity of graphene drums, the phenomenon can be detected using just a single cell.
Farbod Alijani: "For the future, we aim at optimizing our single-cell graphene antibiotic sensitivity platform and validate it against a variety of pathogenic samples. So that eventually it can be used as an effective diagnostic toolkit for fast detection of antibiotic resistance in clinical practice." Peter Steeneken concludes: "This would be an invaluable tool in the fight against antibiotic resistance, an ever- increasing threat to human health around the world."
Source and top image: TU Delft

Top Technology Trends 2021 - with IDTechEx Insights
Graphene for Solar Power
Intertronics Introduces Industry First Adhesives for Wearables
Could Graphene by the Answer to the Semiconductor Shortage?